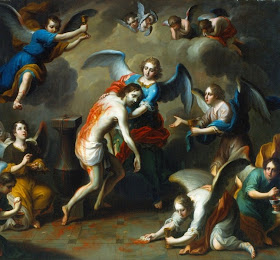 May the Most Holy, Most Sacred, Most Adorable, Most Mysterious and Unutterable Name of God be praised, blessed, loved, adored and glorified, in Heaven, on earth, and in the hells, by all God’s creatures, and by the Sacred Heart of Our Lord and Savior Jesus Christ in the Most Holy Sacrament of the Altar.
Amen.
Dymphna at 12:00 AM


Last night I dreamed that I was wailing in front of Walsingham Abbey. I woke up abruptly and spent about an hour reading before I went back to sleep and put the whole  thing out of my mind.  It came back to me this afternoon I read  excerpts from an  interview Pope Benedict XVI gave to an Italian newspaper .  Apparently, he abdicated because he just couldn't handle the traveling anymore and knew he couldn't do  another trip to World Youth Day in particular. I don't blame him for not being able to stomach World Youth Day, the whole thing is certainly not his quiet, cerebral style but this brings up the question of why popes have to attend them. Where is the Vatican document that says the Pope must do mega Masses all over the world? Why on earth would a man as intelligent as Joseph Ratzinger think he was bound to the rock star front man of the Vatican Band?

Maybe 50 years from now this will all make sense but right now it seems like we've all fallen down the rabbit hole and landed in Wonderland with crazy queens, sleeping Doormice and sneering Cheshire cats mocking us at every turn. Lord have mercy.

So Mark Shea and Simcha Fisher got fired from National Catholic Register. When you are a contractor/employee and you bring discomfort to  your boss which in this case is EWTN, the corporate owner of National Catholic Register, you lose your job. Here in Virginia a cook refused to prepare food for a police officer last month. News of this denial of service spread and the restaurant chain made a public apology and fired him. A few years ago a CFO (a very big position) of a company videotaped himself screaming at a young woman clerk. His employers announced that he'd been fired before the week was out.  Last year a woman traveling to an African country on company business posted a joke on Twitter about AIDS that implied that everyone in this particular country was infected. She was fired before her plane landed at the airport. You don't foul your own nest.

Fisher and Shea will both be fine and will probably have new jobs by the end of the month. I'm not interested in what finally did them in but it is a real puzzlement to me as to how these two people became important in Catholic circles in the first place. Fellow lay people, we need to be more discerning about whom we turn to for spiritual guidance and daily advice.
Dymphna at 9:11 PM 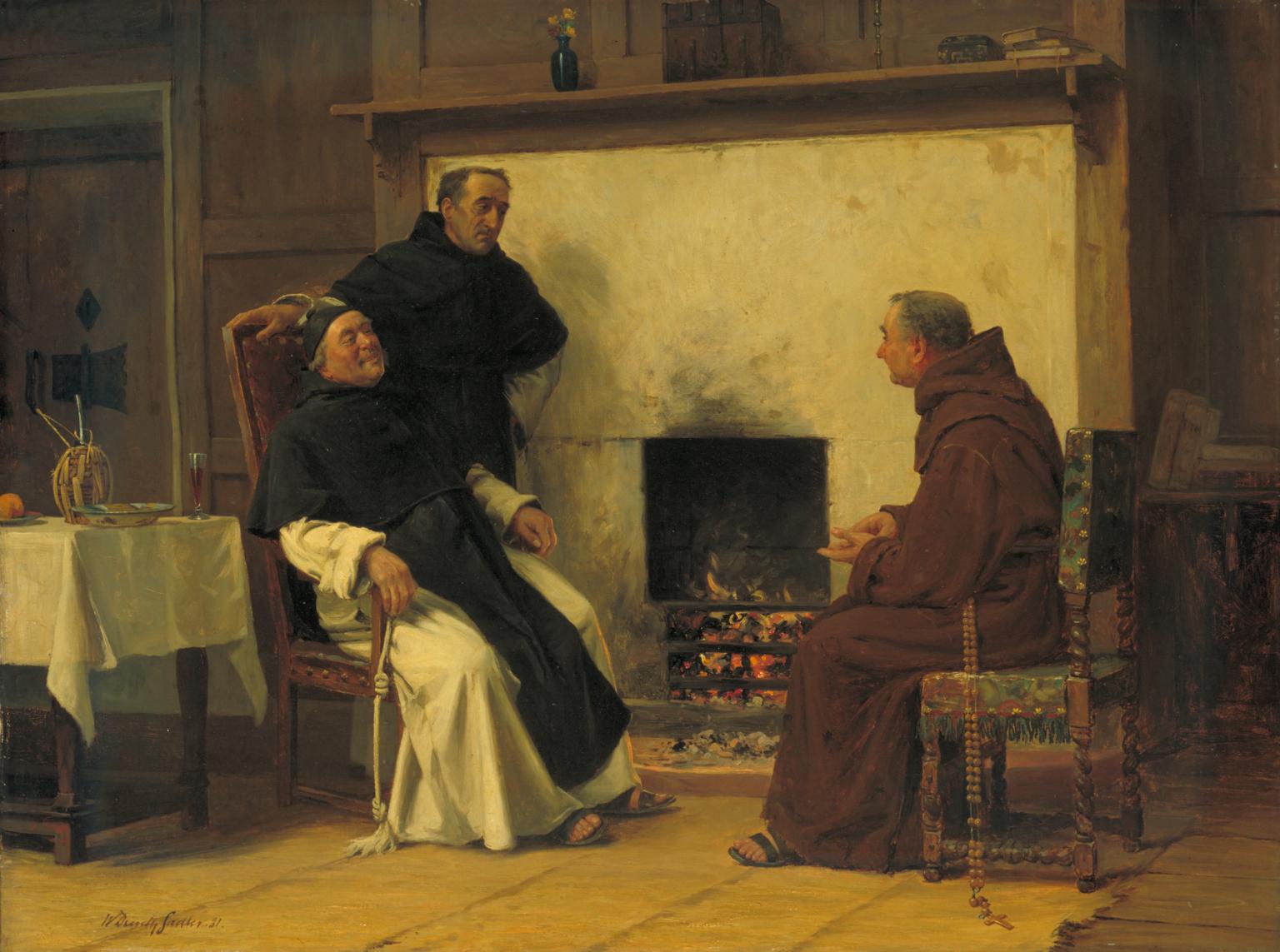 Being a miserable wretch is not a good evangelization tactic.

Where did all these miserable-and-loving-it people come from? I had that thought while reading the comments on a Catholic site yesterday. The moderator said how wonderful it was that Olympic gold medalist Simone Biles didn't end up like a typical foster child but was adopted, and is Catholic. Nice. A guy who who must be a lot of fun at parties wrote in to say that she's not a real Catholic because she goes to the Novus Ordo Mass. Really? How does he know? Look, Novus Ordo  is the only option for most American Catholics. Most don't even know the traditional Mass of all ages still exists. If, like me you have access to multiple Tridentine Masses you are blessed but don't get cocky because you could lose it all at any moment depending on the whims of your bishop.

I am a traditional minded Catholic because I read a lot and realized that what I was reading had nothing to do with the crap I was seeing at my local parish. I decided to go to the Mass that made the saints and so I got up early one Sunday took a train and a bus and walked through a rough neighborhood and found St. Mary Mother of God Church in Chinatown, DC. That Mass was the most beautiful thing I'd ever seen. There was no kindergarten music, there was no hugging and kissing and back rubs and there were no jokes.  The priest in his homily talked about the gospel he'd just read and said things like "sin" and "Hell". It was astonishing. The more I went, the more I read, the more I discovered that Catholicism is deeper than what I'd been taught in high school. I wanted and hungered for that Faith. I was also in my early 30s. I was completely unaware of Traditionalism when I was 19. I went through quite a bit before I walked into St. Mary's and I probably never would've gotten there if I hadn't first walked into the Catholic Information Center in DC with it's marvelous pre Vatican II library.

Simone Biles  takes her rosary with her everyday and does not miss Sunday Mass. That's better than what I was doing at 19. I felt like registering with the site and telling Mr. Miserable to go soak his head but to my delight several other people wrote in and  told him about himself instead. Being miserable and a downright nasty is not an evangelization technique.
I once worked with a positively evil tempered devout Baptist. One day it dawned on me that if I were a savage pagan and this awful woman was the only person professing to be a Christian that I had ever met I would have gone back to my savage lands and continued being a pagan. Mr. Miserable and my evil former co-worker probably drive more people from finding God than they've ever attracted.

Random thoughts for a sickly weekend 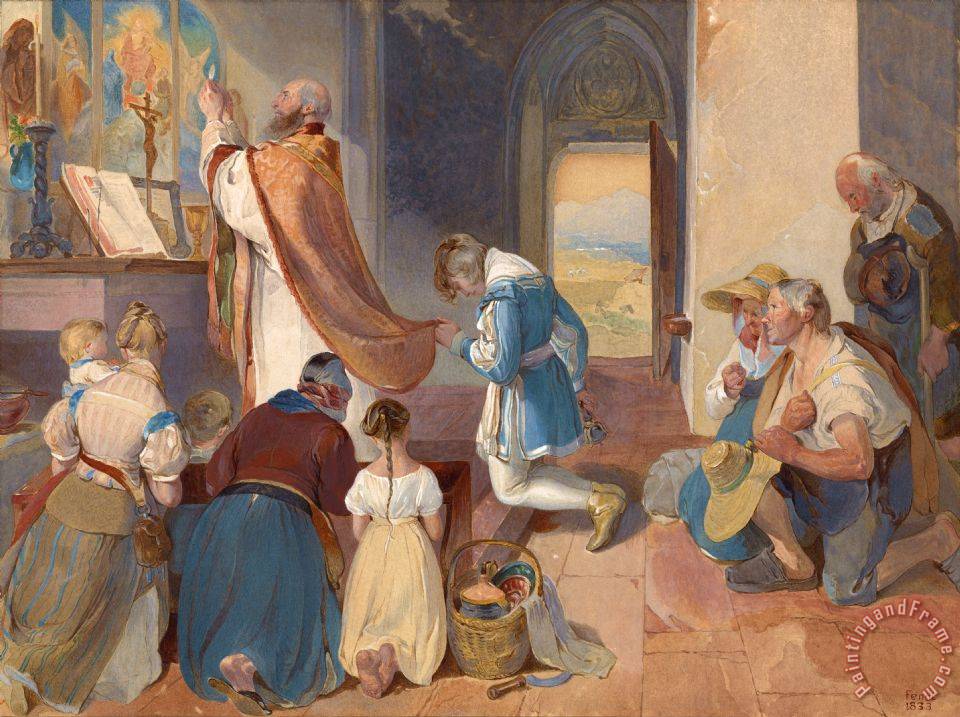 A tale of two "devout" men

King Robert the Pious, ( I suspect that sobriquet was a little joke by his people) was excommunicated because he divorced his wife and marred Bertha, his cousin.  After a long time in the wilderness, Pope Sylvester allowed him back and the marriage to Bertha was annulled. Some time  later King Robert married Constance but still was consorting with Bertha. He even traveled to Rome to ask Pope Sergius IV to let him divorce Constance and take Bertha back.  The pope told him something along the lines of "Look Bob. I am not going to agree to you marrying your own cousin. Get the heck out of here." King Robert went back to Queen Constance and had several children.  He may have continued fornicating with Bertha but their sins produced only produced one still born son.
In the present day Vice President Joe Biden, who calls himself devout, officiated the union between two men. It's no rumor. He was pleased as punch to tell it and there are photos. Cardinal Wuerl will probably smile his cool reptilian smile and shake the Vice President's hand the next time they see each other.*

* I have a question? Can any Catholic, whether he is a judge, a clerk of the court, a notary or the chief or vice chief  executive officers of the United States officiate at any kind of civil marriage?
Dymphna at 2:17 PM

Pray for us, Mother.

First Friday for the Sacred Heart

Holy martyrs of Norogrodek, pray for us. 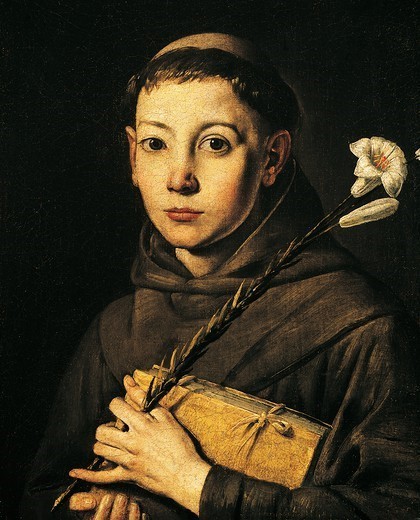 Of all the paintings I've seen of Saint Anthony this is the first one that shows him as a young novice.
Dymphna at 9:00 PM
‹
›
Home
View web version